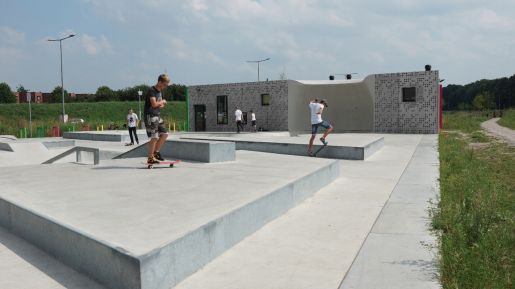 realization: 2014
title: lot k
quote: ‘designing public space and a building as a unity’
client: municipality of the hague

On a triangular plot, boxed in by a railwaytrack and a connecting road, Kavel K is situated. It is a skating, sports- and youth facility which attracts a wide range of different user groups. The public space and the building are designed as a unity; the facade and the skate-cradle melt together.

The small strip of land is divided into three zones: skating, youth centre and sports. By positioning the youth centre in the middle of the zone, a front- and backside are created, between which the building forms the hub. The entry zone is flanked by the skate facility, which is elevated half a meter above ground. As a contrast to the front, the multifunctional sports court in the back is sunken, all edges can be used for activities.

It is inevitable that the facade will be sprayed with graffiti. Instead of seeing this as a problem, the design anticipates on it in advance. The facade consists of large concrete elements, in which a braille pattern is pressed. The graffiti can be removed, but remains visible in the recessed circles. As a result, the facade turns into a canvas, in which an everchanging colour pattern reflects the history.

The greatest merit of Kavel K is the relaxed mix of diverse user and age groups, catalysing positive activity on the edge of this young district.